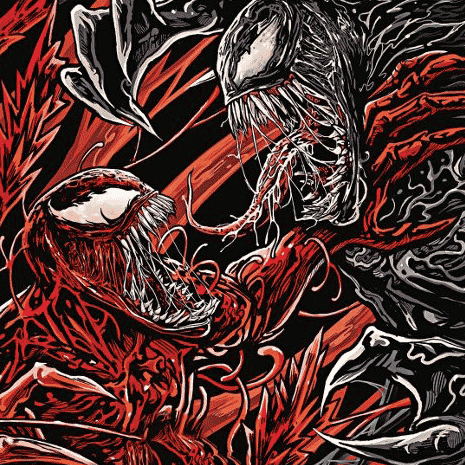 This week on Capes and Tights, the crew takes a dive into Venom and Venom: Let There Be Carnage movies and let us all know how they feel.

Venom released on October 5, 2018 to a tune of $856.1 million on a $116 million budget. The film was directed by Ruben Fleischer (Zombieland) and starred Tom Hardy, Michelle Williams, Riz Ahmed, Scott Haze, Reid Scott, and Jenny Slate. The symbiote film was not well received by critics, getting a 30% rating on Rotten Tomatoes. However, viewers were a bit more favorable at 81%.

The sequel to the film, Let There Be Carnage, released on October 1, 2021 after many COVID-19 related delays. The movie brought in $483.2 million in the box office, which is amazing during the pandemic. The budget was similar to the original film at $110 million. Hardy, Williams, and Scott all return, while Woody Harrelson, Noami Harris, and Stephen Graham joined the cast. The Andy Serkis (Mowgli) directed film hit 59% critic score on Rotten Tomatoes and 84% audience score.

Be sure to check out the crew’s review of Spider-Man: Homecoming, Far From Home and preview of No Way Home.