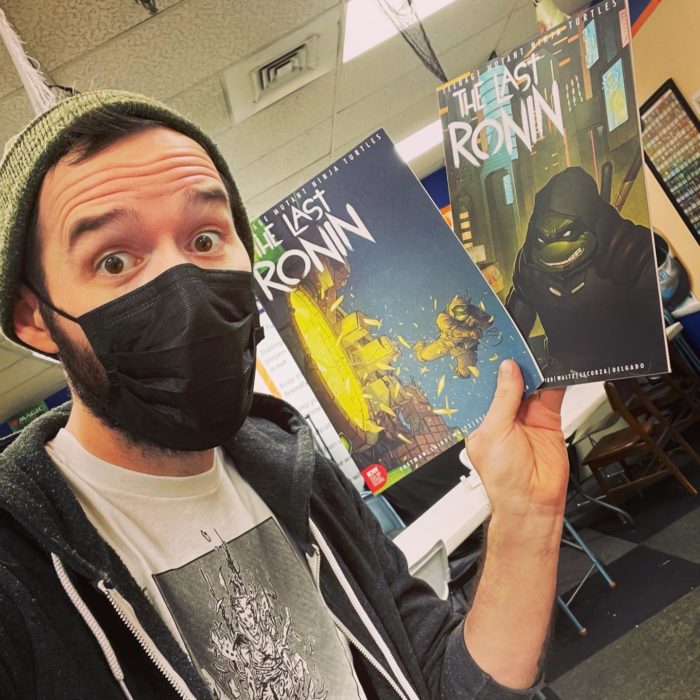 As we celebrate the one-year anniversary of the release of The Last Ronin #1, we rewind to October 2020 when Justin discussed the series with comic book artist Ben Bishop.

The Last Ronin released Wednesday, October 28. Issue #1 includes a single page of work from Ben, but he came on board to help the remainder of the five-issue series. Bishop is a series artist for the remaining books as well.

In addition to chatting The Last Ronin, TMNT and other comic book nerdism, Justin and Ben talked Bishart Kids Club. How did the club get started? What does the club entail and how can you be a part of it? The two discuss all these questions, but also what was released in the Quarter 3 Mega Bish tier box.

Ben is the founder and owner of Split Decision Comics where he created The Aggregate and more. Bishop is the series artist on Kevin Eastman’s (co-creator of TMNT) comic, Drawing Blood which raised over $100k on Kickstarter. Drawing Blood Book 2, and The Aggregate Book 2 are in the works.

He self published his first graphic novel, the 300 page Nathan The Caveman, in 2008 followed by several smaller works. In 2011 Ben illustrated the award winning book, Lost Trail, the comic adaptation of the famous Maine story, Lost On A Mountain In Maine.

Throughout all this Ben has also been worked on characters like the Bloodshot for Valiant Entertainment, Savage Dragon for Image comics, Batman, Transformers, Gi Joe, and more. He has also found time to draw all of Masons Brewing Company‘s beer cans.